At the meeting of the Council last week, the matter of silex walks received a good deal of discussion, and feeling among some of the members became somewhat tense before the matter was disposed of for the time being. Two years ago the walk on Division street was projected, but when the contractor got as far as the railway, it was so late in the season that it was thought unwise to proceed farther for fear of frosts.

This year, several weeks ago, a petition came in from residents on East Main st for a walk from Jacob Wigle’s corner down to Mrs. Harris’ place and at a meeting of the Council in April, another petition was presented asking for a walk on Mill st from J.E. Brown’s corner east to Division st. Some members of the council, feeling that the council could not very well build more walks at present, decided to appose building all but the Division street walk. Others on the board agreed, and we believe very reasonably too, that the other petitioners had as much right to have their petition granted as had the petitioners on Division st and that if all the walks petitioned for were not built, some of them should not be. The force of this argument, though strong, was not enough to win over the opposition, so the Mill st and main st walks were thrown out.

No tax-payer likes to see the council go into a reckless expenditure of money, but there are very few taxpayers who care to wade in mud sometimes ankle deep, four or five months in a year when they wish to get up town, and are quite willing to pay the extra assesment (sic) a decent walk would entail.

The cost of the walks if paid for in one year might be burdensome to a few, but when the cost is figured out as spread over fifteen years, it is not felt by any. As the mtater (sic) now stand, no more than the Division street walk will be built this year, and unless the sentiment at the council board changes, there will be none next year, because the town’s finances which seem to be the obstacle in the way, will be no better then than now. We cannot agree with the majority of the board on this question any better than we can with their street watering policy.

A summer resort town with its hundreds of visitors here every year, ought to take a little pride in keeping the dust on its main streets from smothering everything. Poor sidewalks and dusty streets, are the last things that should be tolerated in any progressive town.

The Division street walk if completed as at present projected, will be patchy at best, simply because a few ratepayers along the street will not give eighteen inches or two feet off the front of their property, so that the walk can be built far enough from the shade trees to make a good job. It would have been better to have had this concession from all ratepayers, or else have torn up the old walks and let visitors and residents walk in the mud or dust until such times as ratepayers could see the necessity of granting a reasonable request.

Residents on Division street south complain of depredations to their lawns by cows running at large. It is astonishing how little regard some owners of cattle have for the rights and feelings of their neighbors. The town by law against this nuisance should be strictly enforced.

Owing to the experience of Kingsville with outside contractors for silex walks not being of a satisfactory nature, Mayor Wigle thought this year that the work might be left with the home people, and advocated this at the board. There was considerable opposition to his proposal, only one councillor being in favor of it. However, the [unclear] proposed that a test walk be [unclear] and if it cost more than eight cents per foot he would pay the difference out of his own pocket. The council agreed on this and M.J. Parker was engaged to put in the walk by the day. A strip near the railway tract on Elm street was built, and when completed was so satisfactory in appearance and price to the ratepayers, as well as to the council, that other walks will be put down on the same basis. This sample walk cost just six and four-fifths cents per foot, and is a four-inch walk made of first class material.

The contracts for all walks built in the past were for four inch depth, but the breaking up of some portions of the walks reveals the fact that 2½ inches was the depth in many places. Other defects show that the material was either defective or a smaller percentage of cement was used than was called for in contract. The town has been compelled to make repairs in the walk that should have been made by the contractors. The walk on Division street was completed this week by Mr. Parker, and is as fine a piece as we have anywhere in town. The material is all of the best the walk is full four inches thick, and is apparently up to standard in every way. It may cost a little more than the first put in as a test, owing to the large maple roots which had to be removed on the way, but it will not come up to 8¢ per foot. This is quite a drop from 11¢ which the town has hitherto paid. The work so far done by Mr. Parker is a credit to him in every way, and largely through the efforts of the mayor we are getting walks for a little over one-half former prices.

In justice to Mr. Cadwell, former contractor, we may say that the walks put down under his personal supervision several years ago are standing well and appear to be up to contract.

The silex walk on Mill street has been completed through to McDonald Ave. Now Mill street has a good walk why should the street itself not have a name in keeping with its appearance? The finest street in town should not have a name tacked to it, savoring of some antiqueted (sic) institution that we have not had in town for twenty-five years. We already have a Watermill street, we scarcely need two with names quite similar. Under existing circumstance King street would be most appropriate; Grand Avenue would not be inappropriate, as it is one of the widest streets in town. Almost anything would be more suitable than Mill. Visitors frequently remark that the appearance of the street is certainly not in keeping with its name and the reason for its being tagged with “Mill” is probably best known to the founders of the town. 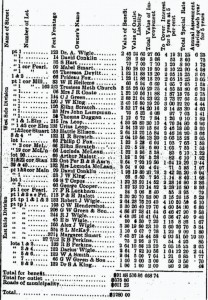 A By-law to provide for drainage work in the Town of Kingsville in the County of Essex and for borrowing on the credit of the municipality, the sum of twelve hundred and eighty dollars for completing the same.

To the Reeve and Municipal Council of the Town of Kingsville.

Gentlemen:- In compliance with instructions received from your honorable body whereby I was instructed to make a survey &c. of a tile drain on Division street in your town (under Section 11 of The Drainage Act 1894), I have made the necessary survey &c. and now report thereon as follows:-

I commenced my survey on Division street at its intersection with Main street, thence I followed Division street southerly to a small creek or swale south of Stanley street in your town.

I find that the said drain is badly needed to give proper drainage to the streets and abutting properties.

I would therefore recommend that said drain be constructed of the form, size &c. as shown on profile and that brick catch basins be built at the points shown on plan so as to give proper drainage to Division and intersecting streets.

All of which is respectfully submitted,

By-law No. 4 to prohibit certain acts in the town of Kingsville was read the necessary number of times and finally passed.

1.  Throw or deposit any dirt, filth or rubbish upon any street, road, lane or highway of said Town.

2.  Spit upon any sidewalk or the floor of any public building, or to otherwise foul same.

3.  Loiter upon any sidewalk or obstruct pedestrians on same.

4.  Post indecent placards, writings or pictures or to write indecent words or to make indecent pictures or drawings on walls or fences in streets or public places.

5.  To be drunk or to use profane, obscene, blasphemous or grossly insulting language or commit any other immorality or indecency.

6.  To lead, ride or drive any horse or other animal upon any sidewalk, except at or opposite street crossings or roadways.

7.  To tie any horse or other animal to any shade tree, or to injure or destory (sic) any tree or shrub planted or preserved for shade or ornament.

8.  To deface private or other property by printed or other notices.

9.  To drive through the streets faster than eight miles an hour.

10.  To make loud noises, such as shouting or singing, on any street to the annoyance of any residents.

Any person guilty of an offence under this by-law shall be liable on summary conviction to a fine, in the discretion of the convicting Justice or Magistrate, in a sum not exceeding $50.00 and costs, and in case the same are not paid within the time limited by such conviction the same may be levied by distress and sale of the goods and chattels of the offender and in default of sufficient distress such offender may be committed to the common jail of the County of Essex for a term, not exceeding twenty-one days.

This by-law shall take effect from and after the passing thereof.