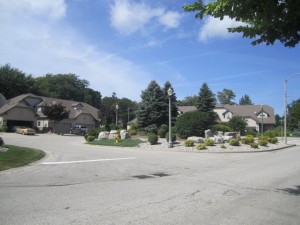 In 1916, the Town of Kingsville granted an eastern portion of Lakeside Park to the Department of the Naval Service of the Dominion of Canada for a fish hatchery. Built on the west side of Division Street South, the hatchery was 87 feet long by 36 feet wide, two-stories high and was used to “raise herring and whitefish fry for the western end of Lake Erie.” Also built in 1916 was a two-storey house for the superintendent, just west of the hatchery. The property was returned to the Town in 1962 when the hatchery was closed and the building was used as a Public Works garage. In 1998, the hatchery building was demolished and the superintendent’s house was sold and moved to Elm Street. The property was developed to include these townhouses on the new “Lakeside Crescent” in 2001.

Site for Hatchery and Residence Furnished by Town in Park

WORK TO BE COMMENCED AT ONCE

Mr. Wm. Gray, M.P., London, has received a communication from Hon. J.D. Hazen, minister of marine and fisheries announcing that Kingsville has been selected for the site for the new Dominion government whitefish hatchery.

Mr. Gray had endeavored to have the hatchery located at Port Stanley, but is informed that Kingsville is considered most convenient to the extensive spawning fields in the Detroit river and its mouth, and eggs have been collected near Kingsville for some years. A site has been furnished by this town and tenders for the new buildings are to be called for within a few days.

Capt. Parker, Supt. of the fish hatchery here, has been superannuated, and Samuel Adamson, who was for years connected with the Sandwich hatchery and who has been here since the hatchery was built, has been appointed in his stead. Capt. Parker will retire to Sandwich and Mr. Adamson will remove his family here as soon as the residence at the hatchery is vacated. Mr. Adamson is a thoroughly practical man at the business and we have no doubt that under his management the hatchery will be one of the best in the Dominion.

Local sportsmen will have an opportunity to pick up the odd bargain this Saturday at the local fish hatchery when the Dept. of Lands and Forests holds its annual auction sale of confiscated fishing tackle. Sale starts at 1:00 p.m. but articles will be on display today, tomorrow and Saturday morning.

The town has been offered the hatchery and a government owned residence adjacent to it because the Department of Lands and Forests has no intention of using the hatchery any longer and under the deed to the province, the property has to be returned to the town of Kingsville when it is no longer being used for fish hatchery purposes.

The demolition crew arrived last Thursday and began to make space for 12 new residential townhomes, Developer Mo Kolody will soon begin construction on Division Street South which consists of one 3-unit building, one 4-unit building and one 5-unit building. The demolished building which most recently housed the Kingsville Board of Works has a rich history as the Dominion Government Whitefish Hatchery which began operation in 1916.