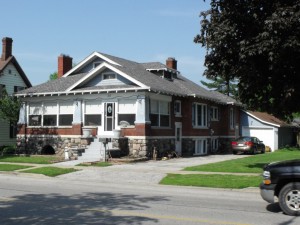 Dr. John Percival Lee moved to Kingsville in 1897 and took over the medical practice of Dr. F.A. Wigle. By 1900, J.P. had a thriving business, was married with two sons and had just purchased a beautiful home on Main Street West. Unfortunately, tragedy struck the Lee family in 1921 when younger son, Jack, died of an infected tonsil in January and older brother, Alder, died of pneumonia in September. Shortly after Alder’s death, J.P. and his wife Bessie purchased a lot on Division Street South and began construction on a new home. When this bungalow was completed in the spring of 1923, the Lees sold their Main Street West home to Oliver and Grace Fox.

Dr. F.A. Wigle wished to announce to his many sympathizing friends and patients, that he has leased his home and office outfit to Dr. J. Percival Lee of Toronto, who has recently been practising medicine at Niagara. Dr. Wigle wished to say that he is feeling better and hopes in the future to assist Dr. Lee to carry on his work.

Dr. Alder Lee, son of Dr and Mrs J.P. Lee, of Kingsville, died at Chippewa on Sunday morning, from pneumonia after a very brief illness. Deceased was 23 years of age, and was a graduate of Essex High School and Toronto Medical College, graduating from the latter in May. On his graduation he received an appointment on the hospital staff at Chippewa and intended remaining there for a year when he was to join his father in practice at Kingsville. His only brother, John, who was attending Dental College, in Toronto, died last winter. Losing their only two children in such a short space of time, is a severe blow to Dr and Mrs Lee. Alder was buried in Toronto on Tuesday.

Dr. I.V. Rumball, Graduate of the Royal College of Dental Surgeons, Toronto, will open a Dental office, adjoining the office of Dr. Lee, Division Street, on or about June 23rd.

Dr. Snider, who purchased the Medical practice of Dr. Lee some time ago, moved into his new home last week. Dr. Lee has moved to the E.A. Brown residence, west side Queen street south.

Dr. W.L. Montgomery wishes to announce that he is established in the office formerly occupied by Dr. Rumball, adjoining Dr. Snider, Division street south, and is ready to carry on Dentistry in all its branches.