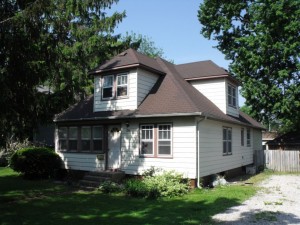 When John Henry Clark and his wife Rachel sold their farm and moved to Kingsville in 1913, it wasn’t for retirement. J.H. had lived in (Brighton) Ontario, Michigan and (Reno) Nevada before taking up farming in Gosfield South in the early 1900s. In addition to farming, J.H. also ran a series of stores in Kingsville, Arner and Olinda. But in 1913, Clark’s newest business venture was real estate development, and by the end of the year he had built five houses in Kingsville and purchased two more. So when Rachel’s brother, Dr. Colin Campbell Vardon, and his wife moved from Newberry, Michigan to Detroit and were looking for a summer home, they had J.H. build this cottage on Division Street South for them in 1923.

J.H. Clark has rented the last house he built on Mill St. West to Robt. Green who will occupy it in a few days. Mr. Clark is having the foundations put in for a couple of new houses on Pearl St. [24 and 28 Pearl St. W.] on the back of the hotel Exchange lot, which he purchased last spring, and has purchased the lot just west of Robt. Conklin’s residence and is tearing down the old building on it preparatory to ercting [sic] another house [42 Pearl St. W.]. This one is rented before it is started. This will make five new houses for Mr. Clark this season. The other two that he bought will make him the owner of seven houses when they are all completed.

Mr and Mrs Colin Vardon of Newberry, Mich., and Mr. Geo. Vardon of Detroit, were visiting with Mr and Mrs J.H. Clark, Mill street west, over the week-end. The Messrs. Vardon are brother of Mrs. Clark.

Dr. Vardon of Detroit has purchased a lot off the north side of the W.M. Webb property, Division St. south and has let the contract to J.H. Clark for the erection of a fine new residence, which will be gotten under way as soon as the weather permits.

John Henry Clark died quite suddenly Monday afternoon last at his rooms at Glen Miner’s, Division Street south, in the 80th year of his age.

Deceased was born near Brighton, and grew to manhood there. He followed farming and later kept store. He moved to Michigan for a few years, then went to Reno, Nevada, where he spent some six years, when he returned east to Windsor. After three years in Windsor, www.wutransfers.com Mr. Clark bought the “Letter K” farm in Gosfield South, and followed farming until 1905, when he sold out and bought a farm on the Section Road. Some time after this he bought out the store business of the late Alfred Allworth, Kingsville, in 1908, which he later sold and then bought out the general store of Cooper Greaves, at Arner. Three years later he sold out and bought the Olinda store business. One year later he traded this business to Mr. William Setterington for his farm. In 1913, he sold out and moved to Kingsville, where he has lived ever since.

He had been twice married, his first wife being Elma Clark, of Brighton, by whom he had one son, Herald, of Gosfield South. His second wife was Mrs. Rachel Vardon, of Pickering, who died here eight years ago, leaving one daughter, now Mrs. Roy H. Scratch.