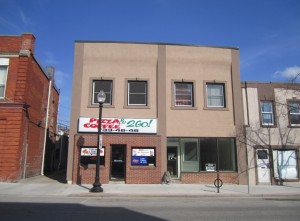 As advertised in 1924: “Over a Million People trade with us each week. Most of them are women – thrifty housewives who “set a good table” but buy where they get the most for their money. They trade at Dominion Stores. Here in these stores, each a part of the greatest retail grocery organization in Canada, they shop – and save. Many are wives of poor men. Others are well-to-do. Yet, one and all, they are guided by a sturdy sense of thrift.” Bon Jasperson had this block built for Kingsville’s branch of the Dominion Store in 1926.

The Dominion Store is now located north of the Reporter Office. It was moved into position on Monday by N.J. Stephens. The new store will be started at once by Mr. Jasperson, and will be in readiness for occupation before cold weather sets in.

Dr. Campbell has moved his dental office from the Conklin building corner of Division and Main Sts., to a flat in the new Jasperson building, opposite the post office.

The new home of The Essex County Reporter and The Lake Shore News, which has just been completed, is shown above. The ground floor is occupied by a Dominion Stores, Ltd., streamlined self-serve market; the upstairs is more than two-thirds occupied by the Connery Publishing Company’s newspaper and commercial printing activities.

[. . .] The building is of semi-fireproof construction, measuring 38 feet eight inches on Division street north by 78 feet six inches in depth.

After over 50 years in Kingsville, the Dominion Store will close its doors Saturday, March 1st. It has been located at its present premises since 1940.

J.D. (Ed) Quinn, district manager of Southwestern Ontario for the Dominion Stores, stated that there were various reasons for the closing of the branch. Among them were recent pay hikes to all employees, the store being too small to carry all items carried by city stores and lack of parking facilities.