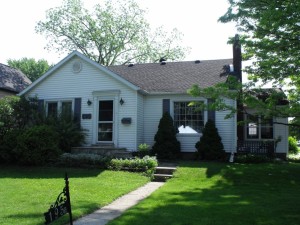 During the 1930s, Canada was devastated by the Great Depression. One of the effects of the economic crisis on the Town of Kingsville was diminished tax revenue. Forty per cent of property tax went unpaid in 1934 and in the 1940s, amendments to the Assessment Act provided that “all lands that are three years in arrears of taxes shall be sold whether occupied or unoccupied at the end of the third year.” The property at 195 Division Street South was forfeited to the Town of Kingsville in 1944 for tax arrears in the amount of $353.91. The following year, the Town sold the property to Gordon and Jocye Hildreth for $175, and they had this house built shortly thereafter.

Notice of Intention To Purchase By the Town of Kingsville

IN COMPLIANCE with Sub-section 3 of Section 157 of the Assessment Act, notice is hereby given that the Town of Kingsville intends to purchase all lots and parts of lots that do not sell for the amount of arrears of taxes and costs charged against them, at the adjourned tax sale to be held at the Town Hall, Town of Kingsville, on Monday the 18th day of February, 1935.

List of properties to be sold can be seen at the clerk’s office. W.G. LONG, Clerk

At its meeting on Monday evening last, the town council talked very seriously about a lot of taxes still unpaid by parties who are apparently financially able to pay. In most cases, these citizen have paid the taxes on the greater part of their property, but are deliberately neglecting to pay taxes on other property in the expectation that the town after three or four years, will take it off their hands.

One or two other wealthy taxpayers with considerable real estate have taken that attitude that when some 40 per cent of last year’s taxes went uncollected that they might as well join the delinquents. The councillors practically all agreed that action should be taken against them to force payment, although the matter will be considered further at a future meeting before definite steps are taken.

The town is almost in a financial strait-jacket. Most of the costs of our municipal affairs are moving upwards or at least are not falling. Our debenture payments are fixed at a fairly high level, and will take fifteen years to liquidate. The present tax rate is just enough to cover our costs comfortably, and we haven’t much in the way of uncollected tax arrears to add revenue for the future. The present tax rate will not allow the town to accumulate any reserves.

We all know, on the other hand, that several town projects are almost a necessity for the near future. We can be fairly certain, too, that federal and provincial governments will help finance municipal public works as post-war employment projects. But the municipality would probably be required to pay a percentage of the cost of such projects. So if follows that if Kingsville hopes to benefit from such grants, the town must have some funds on hand to use for this purpose.

Gordon H. Hildreth, of 195 Division St. South, Kingsville, passed away on Monday, Feb. 11th at Metropolitan Hospital, Windsor, at the age of 63 years.

Mr. Hildreth was born in Leamington and had resided in Kingsville since 1945. He was a former Prudential Insurance Company agent.