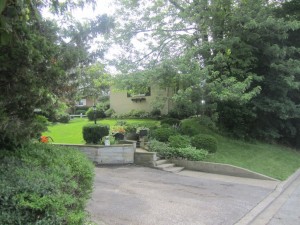 Shortly after graduating medical school at the University of Western Ontario in 1914, Dr. Clifford M. Keillor enlisted to serve in the First World War. Keillor came back from the War with the rank of Major, and married Leila Huntley on September 18th, 1918 in Wingham, Ontario. For a short time,
Clifford had a practice in Kingsville, living near his friend and fellow War Vet Dr. T.D. Campbell. But in the 1920s, the Keillors move to Ottawa where Dr. Keillor served as head of the Canadian Pension Board, Medical Advisor during WWII and later Commissioner of Veterans Affairs. Clifford and Leila moved to their newly built house in Kingsville in 1952 and Dr. Keillor became Medical Administrator in a Windsor hospital until his retirement in 1960.

Dr. Keillor, a returned man who served with the Imperial forces, has opened an office in Kingsville.

Mr. and Mrs. Hugh Murray are residing on Division St. South in the home they purchased from Dr. and Mrs. C.M. Keillor. Mr. Murrary is head of the History Department at the Essex District High School.

Dr. Keillor was born at Wallacetown, Ontario on June 11, 1891. He graduated from the University of Western Ontario in 1914 and interned at the Homewood Sanitarium of Guelph. From 1915 to 1918 he served with the Surrey Rifles of England in the Far East and was discharged with rank of Major. During World War II he served for two years at Medical Headquarters in Ottawa.

He was Medical Advisor and later Commissioner of Veterans Affairs in Ottawa until 1952, then until his retirement in 1960 served as Medical Administrator of Riverside Hospital in Windsor.

Dr. Keillor is survived by his widow Leila, one daughter, one son and three grandchildren.