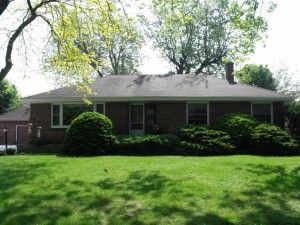 Colin Cornelius (Neil) Quick, an electrical contractor, had this home built in 1954. That was also the year Kingsville was “changed over” from 25 to 60-cycle frequency by the Hydro-Electric Power Commission of Ontario. The previous year hydro employees spent a week in Kingsville, going house to house, taking inventory of all “frequency sensitive equipment.” The estimate for the changeover was 3,700 appliances: “including approximately 850 washing machines, nearly 600 refrigerators and 350 record players.” During the 2-week changeover in April 1954, hydro crews visited every
home with replacement parts to adapt appliances to operate at the higher frequency. A special “Clock and Fan Depot” was set up on Main Street West to exchange older clocks and fans that couldn’t be converted.

Kingsville is to be invaded on April 19. But it will be a peaceful invasion with the white-overalled army infiltrating into the town at 8 o’clock each morning and retiring in good order at 4:30 p.m. The invaders will arrive in a fleet of red trucks, from which their crews will dismount armed with metal containers of various shapes and sizes.

Townspeople, however, may breathe freely, for the red trucks will bear the familiar insignia of the Ontario Hydro Commission, and the crews’ metal containers will hold only peaceful tools.

Cause of the invasion is change-over from 25 to 60-cycle frequency in Kingsville.

This descent upon the town by this army will not come altogether as a surprise, because citizens will remember the reconnaissance patrols who came last year and went into every house, store, office and factory, noting in large books the details of every piece of frequency sensitive equipment, from the washing machine found in nearly every basement to the calculating machines in the banks.

During this operation, which has been timed with military precision to be completed in 12 working days. Hydro crews will change over for domestic customers an estimated 3,700 appliances. These will include approximately 850 washing machines, nearly 600 refrigerators and 350 record players. In addition, some 650 clocks and 200 fans will either be standardized or exchanged for new 60-cycle models.

The invaders’ heavy transport will deliver to each home on the morning of changeover day the replacement parts needed for appliances to operate at the higher frequency. Outside homes on the street being “cut over” will be seen crates containing 60-cycle refrigerator units, while in boxes there will usually be motors and pulleys for washing machines and parts for other appliances.

Even a Hydro changeover has its humor. We are told that in every town there is a small percentage of consumers that can’t see any advantage in 60 cycle. They maintain that if the flickering 25-cycle lights were good enough for their grandparents, they are good enough for them.

For the information of those who are curious, there are over 100 Hydro trucks in town at present and between 250 and 300 workers. One of the outstanding features of the “changeover” is the courtesy shown by the workmen both in homes and places of business.

[. . .] Mr. Quick was an electrical contractor for 25 years in the Kingsville area.