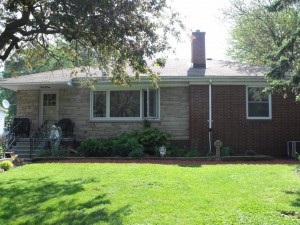 Jack and Iona Allen both retired in 1967, six years after having this home built. Jack had worked for
the Conklin Planing Mill for 42 years, and Iona owned Allen’s Ladies and Children’s Wear for 18 years. The year after their retirement, both Allens were founding members of the Friendly Club, a Seniors group that used to meet at the Kingsville Lions Hall but now gathers at the Unico Community Centre. In 1984, Jack and Iona were named Senior Citizens of the Year by the Friendly Club, and it was also the year the Allens celebrated their 60th wedding anniversary.

The Senior Citizens of Kingsville, now known as the “Friendly Club” meet at Lions Club Recreation Centre every Tuesday and Frday [sic] at 1:30 p.m., euchre, bridge and cribbage being enjoyed, followed by refreshments. There is no membership fee. All are welcome.

Mrs. Jack Allen was the recipient of a Degree of Chivalry at a special ceremony on Saturday evening, Sept. 28th in Toronto conferred by the Department Commander of the Patriarchs Militant, uniformed branch of the Independent Order of Oddfellows. The Decoration of Chivalry ceremony honored 28 members of Rebekah Lodges in Ontario.

The impressive ceremony was held at the new Toronto Secondary School, preceded by a dinner at the Lorraine Rebekah Lodge Hall. Approximately 1000 attended the evening’s program.

The Degree of Chivalry is awarded a member of the Rebekah Lodge for meritorious efforts in the community. The Decoration of Chivalry was bestowed upon Mrs. Allen for her devoted endeavours in the community to the needs of others through the church, the lodge and as a good citizen. Mrs. Allen has been a member of Lily Rebekah Lodge No. 49, Kingsville for the past 30 years and is a Past District Deputy President.

Mr. and Mrs. Jack Allen will be celebrating their 60th wedding anniversary on November 1st. Jack and Iona (Buchanan) were married in Sandwich on November 1st, 1924. Jack was born and raised in Kingsville and Iona has resided in Kingsville for 63 years. Jack was an employee of Conklin Planing Mill for 42 years, retiring in 1967. Iona owned and operated Allen’s Ladies and Childrens Wear for 18 years. The business was sold in 1967. They have three children Ray of Kingsville, Jacqueline (Mrs. Max Small) of Windsor and Jim of Kingsville. There are 10 grandchildren and four great-grandchildren.