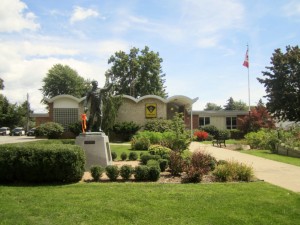 The decision to build the new Kingsville municipal building on the corner of Division and Mill was a controversial one. The other proposed site was behind the town hall on King Street (where the post office now stands). Opposition to the Division and Mill location was due to the popularity of Wigle
Park, established in 1938. When council voted on the location, it was tie (3-3) and Mayor Harold Cull cast the deciding vote. The Kingsville Town Hall, designed by J.P. Thomson Associates, was built in 1962 by Kubis Home Builders for $70,000. The building not only housed the town offices, but also the public school inspector, the V.O.N. and the police department.

Mr. John Swallow has bought from the town, the late Robert (J.) Wigle dwelling on Division street. He has sold a portion of it, and will tear down the other section, and the lot will be turned into a park.

Clean Up Lots Ready For Park

In the hope that eventually permission will be received from the Department of Municipal Affairs to make the property a public park, the town has had men at work during the past week on the half-acre tract on the northeast corner of Division and Middlen [sic] streets, Kingsville.

. . . The Department of Municipal Affairs has heretofore taken the stand that the two lots in the tract should be sold, but in view of the fact that there is nothing now to serve as a downtown park it is generally thought that it would be better to remain as public property.

Mayor Graham reported that when he wrote to the Department of Municipal Affairs to obtain permission for the two mill tax raise for post war work, the minister advised that the provinces were recommending that the municipalities contribute 10 per cent, the provincial government, 15 per cent, and the federal government, 75 per cent toward post war work. This work will take care of unemployment on a large scale.

The demolition of the old town hall, after 79 years of service, will bring back varied memories to hundreds of people. Many a romance was started at its thousands of dances. It was the hub of the town in years past. It was here that nomination meetings were held, and from where the town fathers governed the town for so many years past. It was built in 1883 by Thomas E. Jenner for a contract price of $3,875.00. Actually the first town hall was built in 1852 on the site of the present Salmoni store.

Post War Funds to Be Used for Municipal Building

In connection with the proposed use of the Post War fund, it was moved and carried that it be resolved that the funds contained in the town post war reserve fund, plus accrued interest, be used for the purpose of paying part of the cost of construction of the new municipal building.

The cold weather did not deter a couple of hundred Kingsville citizens from attending the official opening of the town’s new Municipal Building last Saturday afternoon.

Remarks and addresses by all speakers were shortened due to the cold winds and freezing temperature.

[. . .] Mayor Harold Cull gave the address of welcome and later cut the ribbon officially opening the building. He was presented with the keys by John Couchman representing the architects, J.P. Thomson Associates, and by Steve Kubis, general contractor.