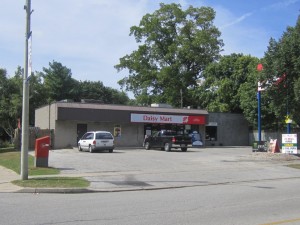 The lot on the corner of Division and Elms streets remained vacant until the 1950s, when Al’s FINA station opened offering gasoline, oil, car washes and minor repairs. The property was sold in 1976 and the new owners wanted to convert the property into a convenience store and gas bar, but the
neighbours objected. At a council meeting during the summer of 1976: “The contact with the neighbors resulted in a reasonable compromise: a gas bar was opposed and the immediate homeowners wanted a private dwelling. If the property is to be commercial the compromise is for a convenience food store without a gas bar.” It took a couple of years, and a hearing with the Ontario Municipal Board, before the plans for a variety store were completed. A portion of the original station was torn down and the 30×56’ addition was completed in 1978.

Building Inspector Everett Upcott received a request for a variety store on the Fina property at the corner of Elm St. and Division St. South and this was referred to the Planning Board.

A petition signed by approximately 40 residents opposing a variety store on the corner of Division Street South and Elm Street was submitted to council, Pat O’Malley, Joseph Leach and Walter Cowan, residents of the area, expressed concern for the development of the former Fina Station property and requested it be zoned residential.

The property is zoned non-conforming use and a variety store is stipulated a from of upgrading and non-conforming use. Council was sympathetic to those who signed the petition and after discussion the decision was made to accept the recommendation of the Planning Board and the residents refusing to issue a permit for a variety store at the location.

Council also dealt with matters concerning the property at the corner of Elm and Division Streets. Council accepted the application for a change of zoning of the property. Council then passed By-law 53-77 to outline the neighbourhood commercial zone requirements and restrictions. The zoning includes the use of offices and local variety stores.

The Ontario Municipal board (OMB) decision which was announced by W. E. Dyer, Jan. 23, has backed up the Kingsville town council and agreed to allow the opening of a combination Pinto Variety Store and office building in a Division Street South building, originally occupied by a Fina gas station, although the area is classified as residential.

The decision was made public prior to the Jan. 22 council meeting at which Acting Mayor Tom Gibson stated his delight that the OMB are behind them in this matter.

At an earlier council meeting some area residents raised objections to the proposition because they were against the noise, traffic, litter and late night hours they felt go hand-in-hand with such a franchise.

The Board felt this was not sufficient cause to withhold their approval. A 10-year lease had been signed previously with Loeb Ltd. of Toronto to operate a gas bar, Maurice Gartenberg, owner of the property since 1977, dropped plans for a gas bar and has applie [sic] for zoning to permit an office.