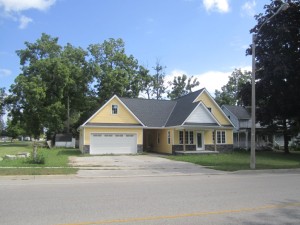 The home torn down to make room for this house stood on this property since 1922, but it wasn’t built there. William Pearce, a newly retired farmer, hired N.J. Stephens to move the house over three miles from his farm to this lot on Division Street South. Pearce was born in Newfoundland and moved to Kingsville with his parents when he was just a boy. As an adult, William acquired a farm on the 4th Concession and “followed farming all his life.” After retiring at age 70, William and his third wife Esther moved from the farm to Division Street South. Two months later, while visiting his son Albert on the farm, William died of a heart attack. The house that replaces William and Esther’s was built in 2013.

Mrs. Wm. Pearce, An Old Resident, Is Laid At Rest

The funeral of Hannah Catherine Blair, wife of Wm. Pearce took place Monday from the family residence Division Road, Rev. J.E.J. Millyard officiating, interment being made in Greenhill Cemetery. Mrs. Pearce has been a resident of Essex County for fifty years. She was born Feb. 26th, 1817, in Boltin, York County where she spent her girlhood days and later came to Cottom (sic) and settled on a bush farm which is now known as the J. Helkie farm. Mrs. Pearse was seventy-two years of age, Methodist in religion and had a kindly home like nature. She had been a long and patient sufferer till she passed peacefully away Saturday Nov. 15th. She leaves to mourn her demise a husband, one daughter, Mrs. E. Taylor, and one son Lewis, at home, Mrs. Jas. Carder, West Lorne, Mrs. J. Bennett, Kingsville, Arthur and Albert, 4th concession.

Mr. Wm. Pearse is moving his residence from Division Road north to town and placing it upon a lot on the east side of Division St. just south of the P.M. track. When it is put in condition he will make it his home. N.J. Stephens is doing the moving bringing the house a distance of over 3 miles.

Wm. Peace (sic), an old resident of Gosfield South, died suddenly at the home of his son, Albert Pearce, of the 4th concession in that township, April 7th, in the 70th year of his age. Mr. Pearce was born in Newfoundland, but came to this county early in life with his parents. Mr. Pearce was married three times, and his last wife survives him, together with three sons, Arthur, Albert and Lewis, of Gosfield South, and two daughters, Mrs. James Bennett, of Kingsville, and Mrs. Eldy Taylor of 4th Con., Gosfield South. He also leaves one brother, John Pearce and one sister, Elizabeth, both of Gosfield South. The funeal took place Monday last, from the home of his son Albert, to Greenhill Cemetery.