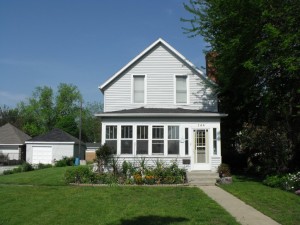 In 1883, Robert Ellison of North Ridge sold his 150 acre farm for $8,800 and decided to retire to Kingsville. He bought this house on Division Street South, built by Simon Wigle in 1882, for $1,000. Robert, his wife Anne and daughter Harriet lived in this home until their new, larger brick house was built on Division Street North in 1887. Used as a rental income property, this home was known as the “Miss Hattie Ellison house” since Harriet remained single until she married Charles A. Quick when she was 71 years old.

George Miner purchased this home from Hattie in 1913 for $1,200 and added the “verandah” the following year. Later owners of this house include William Humphries and Ina & Everett Arner.

Simon Wigle is building a fine looking house on the west side of Division Road near the lake. This part of the municipality is destined to be soon filled with private residences. By the way, there is ample room for a mammoth hotel in that part of the town, and there is money in the speculation too.

Recently, Mr. Ellison, a retired wealthy farmer determined to end his days in Kingsville. In order to settle here comfortably he determined to build a fine brick house, but, in the meantime, he bought a frame house from Simon Wigle and brought several loads of furniture intending to take possession at once and become a resident. To his surprise he could not get possession, as Mrs. Wigle claimed a life lease on the property and would not give up possession. In his disgust Mr. E. left Kingsville, shaking its dust off his fee. He intends to reside now in Windsor.