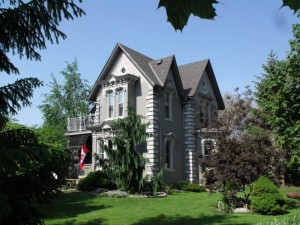 In 1884, local tinsmith Howard Ryerson Kratz (Scratch) purchased two lots on Division Street South, at the corner of Stewart Street, from Lucinda Stewart for $200. Two years later, Howard had this 2-storey brick house built using local masons Newell and Lewis Woodiwiss. The home was completed in time for Howard’s marriage to Mary (Minnie) Woodbridge in the spring of 1887. Unfortunately for the newlyweds, it was announced in 1888 that “the route of the railway through this village has been finally located, the southern survey having been adopted, which will cause the road to run through the centre of Stewart Street. It will be midway between the business part of the village and the harbor.” Despite the train tracks, Howard and Minnie stayed in this home until 1906 and raised five children: Ray, Faith, Hattie, Edith and Etta. In addition to tinsmithing, Howard also owned a hardware store and manufactured bicycles, including the “Mettawas Cycle,” which cost $35.00 in 1897 – $2.00 extra for the “Ladies” model.

It is said that death loves a shining mark, and the axiom was never more self-evident in this neighborhood than in the death of Mary Woodbridge, beloved wife of Howard R. Kratz, on Saturday morning last [. . .]

Let us if possible, gather up the elements of the life of the departed and weave of them a picture for the walls of memory. She was the daughter of the late Mr. and Mrs. A.H. Woodbridge; was born on the home place and when a young girl of ten or eleven, she sought and found the pearl of great price, and made it chief among the jewels of her youthful hopes. The intervening years have been filled with loving deeds and untiring sevice for the master, and today her husband and family rise up and call her blessed, for upon the white canvas of her life she drew no uncertain lines which needed to be erased. Her path was marked with deeds of kindness and cheer. Flowers, not thorns; sunshine, not shadow, did she scatter everywhere, and with these she was lavish. Truth was the inspiration of her life and by kindness she exemplified its great worth. [. . .]

Funeral services for the late Howard Ryerson Kratz, who died in his 91st year at the home of his daughter, Miss Faith Kratz, on Sunday were held from the Crawford and Son Funeral Home on Tuesday at 2:30 p.m., Rev. J.T. Flemming officiating. Interment took place in Greenhill Cemetery.

Deceased was born in Gosfield South and had lived all his life in Essex County.