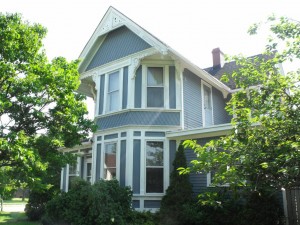 When this house was completed in 1887, it was described as “one of the handsomest houses in town” and “being different from any other in this part of the County.” It was built by Samuel Forster for Dr. Andrew Wigle, local dentist and businessman. Dr. Andrew, his wife and adopted daughter lived in this house until 1897 when they moved to the corner apartment in his newly built block on the south-west corner of Main and Division streets. The new owner was C.W. Hendershot, a merchant of “clothing and gent’s furnishings” with a store in the new Wigle Block. Hendershot sold this home in 1910 to H.P.D. Evans, manager of Molson’s Bank, who kept it for five years and then sold it to Christopher Brien. A “wholesale merchant,” Brien commuted by rail and ferry from Kingsville to his Detroit business every weekday, except during the winter months. Brien eventually moved back to Michigan and sold this house in 1927 to Dr. Hudgins, Kingsville dentist, who then moved his practice from the Wigle Block to his new home on Division Street South.

Andrew Wigle, our popular dentist, has been the happy recipient of a special invitation to the Michigan State Dental Convention at Ann Arbor. Some of the most eminent men in the state will be present. We congratulate our fellow citizen on having been thus honored. Mr. Wigle’s reputation and business is becoming so extended that more help is needed, and lately much pressure has been brought to bear on him to again open up a large establishment in Detroit. The matter has his consideration. We should be very sorry to lose so valuable a citizen.

One of the handsomest houses in town, and which is just about completed, is that of Andrew Wigle, on the corner of Division and Mill streets. In design it is very handsome, being different from any other in this part of the County. The fire proof metallic shingle is a first-class innovation, while the finish of the bay windows is admired by all who see it. The work of construction has been under the supervision of Samuel Forster. The mechanical part was performed by Freeman Bertrand.

[ . . . ]Dr. Wigle was one of the best known and most highly respected residents of Kingsville. He was probably the oldest practicing dentist in Ontario. Outside a few years spent at his profession in Detroit, he spent his days in Kingsville. He sold out his practice a few years ago and even yet his old customers from far and near would come to him for work. [ . . . ] The doctor was in his 86th year, but did not look that old. He was slightly deaf, but otherwise was in full possession of all his faculties. He was a life long Methodist and for a number of years a local preacher and trustee of the church. His friends were legion but his enemies few. He was a fine spirited man, and in every sense of the term, a Christian gentleman.