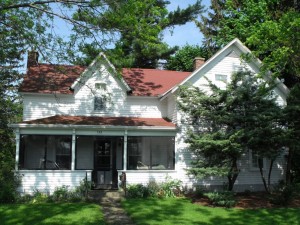 John Loop was one of the first settlers of Point Pelee, and with his wife Mary Lucinda, raised nine sons and one daughter. Urias, the youngest son, purchased land on Division Street South in Kingsville in 1881 just south of property owned by his brother Ira. In 1884, while living in Mersea Twp, Urias married Mary Girardin and they had two children – Louisa and Charles Gordon. A few months after the birth of her son in 1886, Mary died after being ill for only ten days. Urias built this home in Kingsville in 1887, and moved into it with his two children and his retired parents, John and Mary. When Urias died in 1912, Charles G. Loop inherited the home from his father and remained there until 1973. In addition to being a member of the Odd Fellows, Lions Club and the Chamber of Commerce, Charles served on Town Council for twenty years and was the Mayor of Kingsville for four years.

Frank Slater and I. Shaw have purchased Urias Loop’s fishing outfit and have taken possession of same.

Urias Loop has purchased the Old Boss Washer at the west end of the town, and will turn it into a roller rink. He will remove it from its present site to some place not yet decided upon, take off the top story and add it to the end, building on twenty feet more which will make it 120 feet in length.