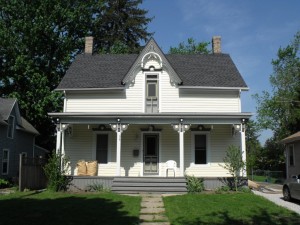 Elihu Scratch, the youngest son of Leonard and Sophia Scratch, was born in 1852 on the family farm on the lakefront near Arner. When he married Ellen Snyder in 1874, the young couple remained on the farm with Leonard and Sophia for 13 years. In February 1887, Elihu purchased property on Division Street South and built this home a few months later. The following year, Elihu purchased a lumber business from local builder Thomas Drake, who was moving to Iowa. Elihu travelled to Georgian Bay to order and import 200,000 feet of pine lumber, lath and shingles during the summer of 1888. Eventually expanding his business, Elihu had a lane created to the north of his house to access his “Coal & Wood Yard” in his backyard. In addition to his various business interests, Elihu also served his community as trustee, councillor, reeve and mayor. Elihu and Ellen were married for 56 years and had three children: Helen, Josephine and Leonard J. After Ellen’s death in 1931 and Elihu’s in 1933, oldest daughter Helen (Nellie) Hackett inherited this home.

The wife of Elihu Scratch gave birth to a daughter a month ago. The couple have been married for ten years and this is their first-born.

Twenty five years ago Mr. Elihu Scratch took a young German boy, named Wilmer Shipe to raise. The lad remained with him for five years, and then thought he would strike out for himself. Last evening a gentleman called on Mr. Scratch and on making himself known, proved to be the boy of twenty years ago. He is now a well-to-do business man in Denver Colorada (sic).

An event of considerable local importance, on account of the prominence of the contracting parties in South Essex, took place yesterday afternoon at the home of Mr. and Mrs. Elihu Scratch, when their daughter, Josephine Margaret, was united in marriage to Dr. Robert Foster, of Detroit, formerly of Harrow. The relatives and a few friends witnessed the ceremony, which was performed by the Rev. W.H. Ebersole at five o’clock. The bride was attired in Duchess satin made in simple lines, with Irish point lace and pearl trimmings. A veil of Tulle was held to the coiffure with lilies of the valley and she carried a bouquet of bridal roses. She was attended by Miss Anna Foster, sister of the groom, who was attired in a satin gown, of apricot shade and carried pink roses. Hazen Schultz, of Detroit, attired in white, acted as ring bearer. Mr. Leonard Scratch, brother of the bride, supported the groom. The floral decorations in the home were carnations, smilax, roses and other flowers.