As it was later written, “Hiram Walker, the whiskey magnate, deserves the credit for having made the cool breezes of the northern shore of Lake Erie more accessible to Detroiters during the summer months.” In February 1889, Walker purchased property on the south side of Park street, east of Division Street South for $3,000 from Dr. S.A. King. Detroit architects, Mason and Rice, were commissioned to design Walker’s ‘mammoth summer hotel’ as seen in this rendering illustrated by Albert Kahn, architect of the Kingsville railway station. Construction began in March under the supervision of Dr. S.A. King and by April, 150 men were working to complete the hotel for the summer season. As reported at the time of construction, “The estimated cost of building and furnishings will be $200,000.” 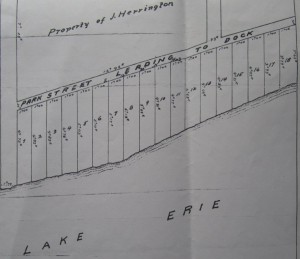 On Part of Lot No. 1 in the Broken Front Concession, East of Division Road in the Township of Gosfield, The Property of Messrs King & Smart.

In 1884, the land south of Park Street and east of Division Street South was divided into 18 building lots, each with 66 foot frontage. It was these 18 lots that Hiram Walker purchased for his new hotel.

Natural gas was struck, Wednesday, below Kingsville, at a depth of about 980 feet, and the roaring noise can be heard for a long distance. Great excitement prevails in consequence of the find. It is thought the pocket struck is inexhaustible, but the company will continue to go farther down.

Work has commenced on the new $50,000 hotel, on Monday. It is to be 266 feet long. About 20 Italians are at work excavating for the foundation. Large maple and elm trees are being planted in double rows on Lansdowne Avenue. Some of them taking four horses to move them.

Walker & Sons’ mammoth summer hotel is going ahead in rapid style, and an addition of 100 feet has been added to original plan. About 150 men are at work on this structure. The estimated cost of building and furnishings will be $200,000. Dr. S.A. King has the general supervision.