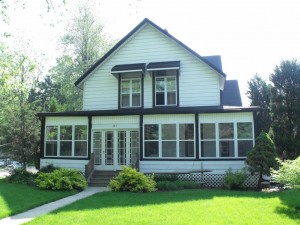 James F. DeJean was born in 1841 in British Guiana on the northern coast of South America. After being in “the service of Her Majesty in the tropical climate of India for 15 years” and enduring “the hardships of a sailor’s life on the Mediterranean for five years” DeJean emigrated to Canada, married Ellen Ormerod of Brantford and settled in London, Ontario working for Molson’s Bank. As a summer vacationer to Kingsville, DeJean purchased property on Division Street South in 1887 and had a summer cottage built in 1889. Two years later, DeJean decided to move to Kingsville permanently to open up a private bank. He purchased property on Main Street West, constructed a 2-storey brick building, moved his cottage to Chestnut street and had this “handsome residence” built, all in the spring and summer of 1891. Unfortunately, DeJean’s health began to fail shortly afterwards and he died in April 1893. Ellen remained in this home until 1899, raising her children (Nellie, Gertrude, Marion, Frederick and James) and running a “fancy goods and notions” store in the DeJean Block on Main Street West.

Mr. DeJean, of London, will build a handsome new residence on his lot on Division street. The building which is situated on the site where the new one is to be, will be moved on to Chestnut street where it will be to rent. The work of excavation for Mr. Dejean’s new block of stores was commenced last week. The building will be two stories, 38 x 45 feet, and will cost $3,000. The stores will be fitted for a banking office and drug store.

The Masonic lodge, of which the late J.F. DeJean was a member, was in attendance at his funeral and marched with the corpse to the Greenhill cemetery where the interment was made. Deceased was 52 years old and was born in British Guiana.

Mr. Fred DeJean has secured a situation as clerk in Molson’s Bank here. We feel assured that if honesty and integrity count for anything Fred will get to the front in time.

Mrs. Fowler of Detroit, is preparing to move into her new residence at the lake, formerly the Mrs. DeJean property. She has had the house repaired and refurnished. It is finished throughout with ingrain paper. The effect is terra cotta and old gold, which is pleasing and rich in appearance. The work was done under the supervision of S.L. McKay.

A musical of an unusually artistic order was given last Thursday evening at the residence of Mrs. W.J. Fowler, Division st. Each number was charmingly rendered and greatly appreciated. The participants were Mrs. George W. Henry, pianist; Miss E.M. Fowler, contralto; Mrs. Westcott, contralto; assisted by Julius V. Seyler, pianist and Alfred Hofman, cellist, two distinguished musicians from Detroit. The evening was one which will be long remembered by the few friends entertained in honor of Mrs. Seyler, Miss Seyler and Mr. Seyler, Mrs. Fowler’s guests from Detroit.