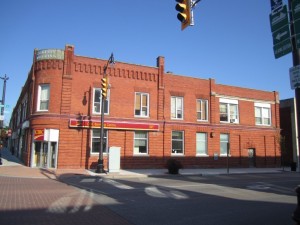 The lifetime motto of David Conklin (1854-1952) was “Do what you have agreed to do, but be careful what you agree to do.” His father died when David was six years old and he was raised by his uncle Simon Wigle, from whom he “acquired his early knowledge of timbering.” Early days included forest clearing and led David to own a very successful lumber mill. Other investments included farming and commercial properties like the Conklin Building. David purchased the vacant lot on the south-east corner of Division and Main from J.W. King in April 1901 for $1,600, and the brick block was completed by December. The building was designed by architect John A. Maycock and D.H. McCay was the superintendent of construction. Shortly after completion, Molson’s Bank moved into the corner section and “the dry good establishment of C.W. Hendershot” occupied the L-shaped store which had entrances on both Division and Main.

The contracts for the new Conklin block have been let, DH McCay does the carpenter work, Wm Maycock and Wm Davey do the brick and stone work, and Ed Kennedy the plastering.

In the year 1922, under the pastorate of the late Rev. Joseph Hibbert, Epworth Memorial Hall was erected for the purpose of accommodating the growing Sunday School and meeting the needs of the increasing social demands made upon the church.

At the same time the Memorial Hall was in course of erection there was installed in the church the splendid Casavant Organ, the gift of Mr. David Conklin and his son, William, in memory of the the late Mrs. Wilhelmina Conklin, wife of Mr. Conklin and mother of William.

David Conklin, Kingsville’s Grand Old Man, passed away Wednesday afternoon, May 7th, at the Leamington District Memorial Hospital, in his ninety-eighth year. His life coincided with the life of his native town for almost a century, through pioneer days, forest clearing, lumbering, business expansion and town building, even into our more settled commercial and agricultural era. The residents of Main St. West and Division St. North have commented many times that Mr. Conklin’s car was as reliable a time-piece as an alarm clock. His time never varied as he pursued his regular and methodical routine of farming and operating his saw mill. He executed his business affairs until last autumn with regularity, precision, accuracy and efficiency. An unfortunate accident occurred last October when he was injured by a motorist while crossing Main St. West on foot. Since that event, the late Mr. Conklin was confined to the Leamington Hospital where he passed away.

Mr. David Conklin’s father, Thomas Conklin, was the only son of Jacob Conklin, and died when David was only eight years old. Left alone with four other children, David’s mother, Susanna Wigle Conklin, agreed to let David live with her brother, Simon Wigle. It was from his Uncle Simon that David Conklin acquired his early knowledge of timbering. Except for about three months when he attended school, Mr. Conklin’s education was obtained from practical experience and from his wife, Wilhelmina Fox, who had qualified as a school teacher.

Driving oxen as a boy of 10 or 12 was no easy task. There were few roads, and most bush trails involved negotiating swamps, Essex County then being probably one-third under water. Little David had not been exposed to higher religion and lived in the tough logging camps. He could remember as a little boy getting lost with his oxen in Hog Marsh, north of Kingsville, “I would cry a little, then swear a little. Eventually I got through all right.”

As a boy of 16, his uncle gave him a job of bidding on the timber in Walker’s Marsh, about 12 miles from Kingsville. Mr. Hiram Walker was at first disdainful of the boy but his respect mounted when David’s tender took the timber by one dollar.

At 17 his uncle put David in his first responsible job – foreman of a logging camp of 75 French-Canadians. His duties were varied. Not the least interesting was the Saturday night chore of rounding up the men from the bars in Kingsville, lining them up and marching them out of town, singing, to their camps a few miles distant. If left alone, the men would have wrecked the town. “They respected me,” he would say. “One reason was that I didn’t use liquor or tobacco.”

The international boundary in Mr. Conklin’s early days was ignored. He timbered in Wayne County, Michigan, along with his operations in Essex County. One of his jobs was removing timber from the site of Detroit’s present Willow Run Airport. Included was elevating timber from the near-by valleys, which others could not do, but which Mr. Conklin performed by a clever arrangement of pulleys. At this time he was earning highly skilled wages, amounting to $1.00 per day.

Leaving his uncle’s employ in about 1882 at the age of 28, Mr. Conklin entered a partnership operating a grist mill in Kingsville. The following few years saw him interested in various enterprises including the district’s first gas well. Steam power was coming into popular use by this time, and about the 1885 he returned to his first love, purchasing a sawmill three miles north of Kingsville.

Twice his sawmill burned to the ground, and each time he rebuilt. Even this years, Mr. Conklin still operated a small sawmill on the site of his original mill. Along with this, he operated six farms. Still possessing a car driver’s license despite rigorous yearly examinations, Mr. Conklin supervised these activities in person. He was ever the man who saw at once the trouble and the cure when some piece of machinery was misbehaving.

There were many serious business depressions in his time. Each of them lasted three years or more. The worst of the early ones started in 1873, 1893, and 1901. His solution in 1901 was to expand his activities, rather than to retrench. Labour and material were lower priced and easily available, and much was supplied to him by debtors as a way of paying their accounts. At this time he built two store buildings on Kingsville’s chief business street, providing accommodation for a bank and ten stores, with office and apartments in the second storey. “Be sure you are right, and then go ahead,” was his advice. “A depression time can provide opportunities as well as hardships.” Until this year Mr. Conklin still looked after these store buildings himself, even keeping his own careful accounts of his revenue and expenses without the aid of a book-keeper.

Mr. Conklin was active in the Methodist Church for many years dating back to the first Methodist Church on Main St. East. He was a member of the building committee for the original Methodist Church on the site of the present Epworth United Church, and has been a trustee since 1887. His lifetime motto was “Do what you have agreed to do, but be careful what you agree to do.”

David Conklin was the only remaining one of the eight children born to Thomas and Susanna Conklin. He was born November 4th, 1854, in Kingsville, on the Conklin lot east of his late residence. He married Wilhelmina Fox, daughter of Mr and Mrs William C. Fox, on February 24th, 1875. His wife predeceased him on March 20th, 1922. His survivors are: William Thomas Conklin, his only son; three grandchildren, Mrs. Manly Miner (Lucile) of Kingsville, William David Conklin of Kingsville, Mrs. Russell Skitch (Nora) of Toronto; seven great-grandchildren, namely: Mrs. Robert Stoffes (Wilhelmina Miner) of Detroit, Annetta, David, William, and Janet Conklin, of Kingsville, Russel and William Skitch of Toronto; and one great-great-grandchild, Suzanne Steffes [Stoffes?] of Detroit.

One Response to Conklin Building (1901)