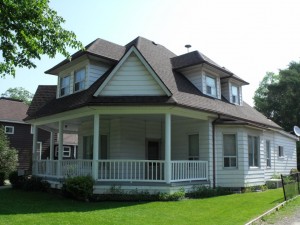 The Alexandra Cottage was the second cottage built by D.H. McCay and G.W. Mercer for George W. Henry in 1902. Used as a rental property until 1912 when it was purchased by Brayton “Bert” Westcott and his wife Inez. Before moving to Kingsville, Bert was a “wholesale and retail dealer in wines, liquors and cigars” in Leamington, and also carried “the finest lines of port and sherry wines and malt stout for medicinal purposes.” After selling his shop to F.W. DeLaurier, Bert settled in Kingsville to become a full time sales agent for the Walkerville Brewery. Leamington not only lost their liquor dealer who provided “personal supervision” to all orders, but also their famed baseball pitcher, who was “the first performer to introduce the body wind-up into local fandom.”

Mrs. G.W. Henry and Mrs. Fowler entertained some eighty of their friends to a Hallowe’en party last evening at Alexandra cottage. The cottage was very tastefully decorated for the occasion. The evening was spent with Hallowe’en games, participated in by both old and young, at the close of which a very sumptuous repast was provided. Everyone went away happy and only feeling sorry that Hallowe’en, accompanied by such an entertainment provided, did not occur oftener. The young ladies were dressed in antiquated costumes, which created considerable merriment. The electrician had the electric lights arranged in very artistic style for the occasion.

The old hilarious game of baseball seems to have lost something of the fire and brimstone that old-time conflicts used to fan. ‘Member them games played between the old Ruthven Invincibles and Leamington, when Ruthven, always just a little too hefty, used to drub us. ‘Member when the mighty Bert Westcott came to town, heralded as the pitcher to beat the Ruthven farmers back to their ploughshares? Mr. Westcott was the first performer to introduce the body wind-up into local fandom. As I recall it, this new article was something superb. We kids all sought to emulate the gymnastic, much to the risk of bones. It was a sort of a super-contortion, which in process gave the spectator a perfect idea of the evolution of a pretsel (sic). ‘Member the first ball delivered to the late George Orton, mighty slugger of the old Invincibles? Well, our pitcher unwound himself and catapulted the ball. There resounded two sharp snaps, one when George clipped the hissing sphere, and another when the rebounding bullet smacked Bert square on the nose. That ended the game. Darn them Ruthven farmers! After that smack it always struck us that Bert’s nose seemed sort o’ drawin’ back, like as if forever apprehensive of flying missiles.

Funeral services for the late Brayton Graham (Bert) Westcott 83 years; who died in Leamington District Memorial Hospital on Sunday following a short illness was held from the Ferguson Funeral Home in Kingsville on Tuesday at 2:30 p.m. with Rev. F.M. Ward officiating. Interment was in Lakeview cemetery, Leamington.

Deceased was born at Wapoose Island, Ont., son of the late Mr. and Mrs. William Westoctt. He was educated in Dresden. Later the family moved to Leamington and in 1910 came to Kingsville. He was employed in the Sales Dept. of the Walkerville Brewery for 50 years.

He was a member of St. Georges Lodge A.F. and A.M. No. 41 Kingsville, and of the Mocha Shrine Lodge in London.

One Response to The Alexandra Cottage (1902)