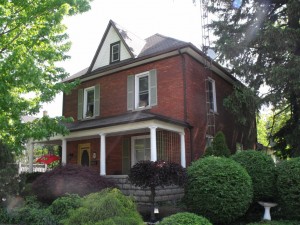 Charles Warren Hendershot moved from Petrolia to Kingsville in 1896 with his new wife, Katherine Webb, to open up a “Dry Goods, Gents’ Furnishings” store in the Grenville Block. Within a year, he purchased the house at 53 Division Street South from Dr. Andrew Wigle and opened another branch of his store in the Wigle Block. In 1909 Katherine’s parents, Frank R. and Julia Webb, returned to Kingsville from Blenheim and had this house built by the Oxley Bros. on a lot purchased from the Hendershots. Charles also sold Frank his Wigle Block business, which Webb ran until his death in 1922. Martha, the widow of George A. Grenville, purchased this home in 1913 and she lived there for 25 years until it was sold to Fred O. Graham.

Mr. F.R. Webb has sold his store business in Blenheim and will remove here as soon as his new house is ready for occupation. We welcome him back to our town and hope that in the future he will not make the mistake of trying to find a better town to live in, because such a town is not yet in existence.

Mr. F.R. Webb has purchased the C. Hendershot & Co.’s stock of clothing and furnishings and took possession on Saturday last. He is inaugurating a clearing sale at which people may depend on getting good value for their money. In another column will be found Mr. Webb’s announcement for this week. His terms are cash and one price to all and money back if purchase not satisfactory.

Mrs. Grenville moved last week to her home opposite the Methodist parsonage which she purchased from Mr. F.R. Webb. She has some improvements put on the house in the form of a fine verandah at the rear, and has now one of the most cozy and comfortable homes in Kingsville.

Mr. Lockwood and his bride, are occupying the Mrs. Grenville home, Division street south, for a few weeks.