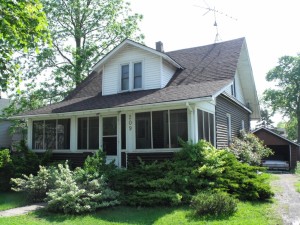 Ohio resident, John Miner Sr., purchased 100 acres of land on the Third Concession in 1872 and he “visited his Canadian home each winter until March, 1878, when he built a log house on the ten acres he had previously chopped down.” The cabin became the home for John, his wife Ann and their ten children: Rebecca, Mary Ann, Ted, Lizzie, Jack, Amos, Charles, George, Florence and Lily. Charles Miner married Mary Jane Creaser in 1889 and bought a farm down the road from the Miner Homestead. After 30 years on the farm, Charles and Mary Jane moved to their new home on Division Street South, built in 1919. Glen Miner inherited the house after the death of his parents – Charles in 1930, Mary Jane four years later.

On Tuesday, April 24th, John Miner Sr. passed away at his late home, Gosfield South. Mr. Miner was born in Leicestershire, England, April 16th, 1829. At the age of 24 he came to America, landing at Boston, Mass. A few days later, he left Boston with fishermen in search of whales, remaining at sea nearly fourteen months, during which time he seldom saw land. Returning to Boston, he worked his way up the country to the State of Ohio, where he married Ann Broadwell, who pre-deceased him June 17th, 1914.

Chas. Miner of Division St., south, was taken ill a coyuple of weeks ago, and on Friday last was taken to the hospital where he died on Saturday morning in his 61st year.

Mr. Miner was born at Akron, Ohio, and came to Essex County with his father and mother, Mr. and Mrs. John Miner, and other members of the family and lived at home until a little over forty years ago he married Mary Jane Creaser, of Glen Major, Ont., and for more than twenty years lived on his farm on the Third concession. Several years ago he built a home in Kingsville on Division street south and lived there until his death. Latterly he has followed contracting and did a great deal of cement work at Cedar Beach and in other sections throughout the county, and he was considered an expert at the business. [. . .]

He is survived by his widow, one son, Glen, an adopted daughter, Mrs. Ed. Cox, and an adopted son, Lloyd Miner.

Glenn Miner, a life-long resident of Kingsville, passed away Monday morning at Leamington Hostpital at the age of 70 years.

Mr. Miner was the son of the late Charles and Mary Jane Miner and the nephew of the late Jack Miner.

He opened a smoke shop and taxi business on Division Street South in 1939. As well, Mr. Miner operated a restaurant on Main Street East for a few years. The taxi business moved from its original location, where the Bank of Montreal is now situated, to the corner of Chestnut and Main Street, and eventually it was relocated to the present address on Chestnut.

Glenn Miner was a very talented musician, and entertained locally for many years, playing both the piano and organ.

He was an avid sports enthusiast who participated in community baseball, and spent many hours hunting and fishing.

Husband of Dorothy (Lundy). Father and father-in-law of Linda and Stewart Francis, of Kingsville. Grandfather of Karen Elizabeth. Brother of Lloyd Miner, Kingsville, and the late Eva (Mrs. Ted Cox).