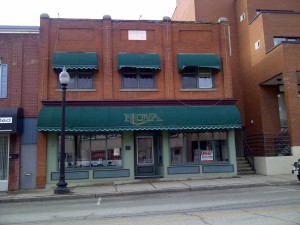 By 1915, Bonzano Jasperson was definitely in need of a permanent office. At the age of 46, Bon had already been involved in private banking (until bought out by Molson’s Bank), ownership of grain warehouses (located at the Kingsville Train Station), canning factory and co-ownership of local lime kilns (with brother George), the Electric Light Plant (with David Conklin), tobacco factory (with Darius Wigle) and gas and oil fields with S.L. McKay. Partnering with local furniture maker and undertaker Charles Pearsall, Jasperson had this brick block built in 1915. When completed, Pearsall opened a jewellery store in the northern section and Bon kept his office above the southern storefront, which housed the customs office.

Mr. S L McKay received a telegram this week from the operators on a property at Cobalt in which he is interested, to the effect that a six inch vein of native silver and a vein of from one to three inches of wire silver had been opened up. The property is known as the Cobalt Contact, is two and a half miles from the town of Cobalt, in the township of Bucke. Mr. McKay, Messrs. Geo. and B. Jasperson and Mayor Wigle have a sixth interest in the property. There are other good properties all around the claim.

Mr. B. Jasperson has purchased the lot on which stood the harness shop of the late Patrick Hart, on Division St., South, and will erect an office block upon it in the spring.

The shop occupied by Chas. Pearsall west side of Division street has been moved across the street next to the lot just north of Mrs. Cooper’s residence on the lot owned by the C.W. Hendershot Co. Mr. Pearsall will join with Mr. Jasperson and put up a brick block on the site of the old building and will occupy the building on the east side of the street until the new block is ready.

B. Jasperson Was Town Old-Timer

[. . .]Deceased was the son of the late Louis Jasperson and Nancy Jane Wigle. He was born in Kingsville, May 25th, 1869, and had resided here all his life.

Deceased was well loved by all who knew him. As a boy he helped his brother, George, clear timber in the Romney Township area. When a young man, he was a private banker in this town. He was keenly interested in the first electric light system in Kingsville which was later sold to the Detroit Edison Co.

Mr. Jasperson and other business associates were responsible for Canadian Canners in this town, and he and his brother George, were responsible for the Hodge Tobacco Co. He was also instrumental in the original distribution plant for natural gas in Kingsville, in fact, he was known in his pioneering in the gas and oil business with the late S.L. McKay, in the development of the Tilbury Gas and Oil Field. He was the oldest independent operator in that business.

Three brothers predeceased him many years ago, Hilton, Fred and George. Deceased was the last of that generation.