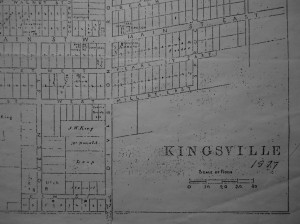 “. . . villages are incorporated when a community within a township reaches a certain population density that justifies the creation of a separate administrative structure. Villages are governed by elected councils consisting of a Reeve, Deputy Reeves and a number of councillors based on the population of the village.”

Until 1877, Kingsville was a small hamlet within the Township of Gosfield. Kingsville was incorporated as a ‘Village’ in January 1878. James H. Smart was Kingville’s first Reeve.

“. . . After the meeting a large bonfire was lighted, in honor of the incorporation of the village, at the corner of Main and Division streets, and a quantity of fireworks were set off from the top of Smart’s block.”

“Our town seems alive with intellectual and musical entertainments. Our Gun Club, Cricket Club, Base Ball Club and Chess Club are flourishing. Houses have been in urgent demand since last fall – None to be had yet.”

“Since the beginning of the long period of business depression which has had the effect of bowling out so many, engaged in all branches of trade through-out the country, not one of our business men has been forced to hand over his affairs to the Official Assignee. Nothing could be more indicative of the correct principles of doing business adopted by them, nor could anything show more plainly that they possess the capital and credit necessary to success.”

“Building of all kinds seems to have taken hold of our citizens. Some of them are busily engaged with castles in the air, and have no time for ordinary structures.”

“Several of the trees on the East side of Division street, Kingsville, were cut into with an ax by some worthless scamp. A reward of five dollars is offered by the municipality to any person giving information which will lead to the conviction of the perpetrator of the act.”

“Division street is being gravelled from Main street to the lake. A much needed improvement.”