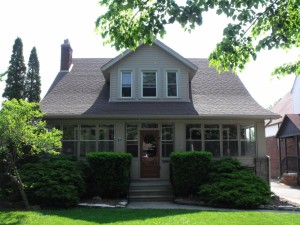 When retired farmer Charles R. Jackson purchased the lot on Division Street South from Curtis Green, he agreed to the following conditions: “1. No building other than a dwelling house which when erected shall not be of less value than $5000 and a private garage shall be erected on said land at any time hereafter. 2. Said dwelling shall be erected upon said lands within 18 months from this date.” He was also given “the right to use as a private roadway a strip of land four feet wide adjoining said land on the south side.” With the end of WWI and talk of building an international bridge between Detroit and Windsor, Kingsville was actively trying to appeal to summer tourists. Building restrictions on Division Street South was an attempt to keep it “one of the most attractive streets one could wish to see.” Not only did Jackson build this handsome home in 1921, he was also know for his gardening skills.

C.R. Jackson has just completed a fine rock well at his home, Division street south. The water is clear and cool, just slightly sulphry, but as in the case of others put down at J.H. Smart’s and G.T. Hardie’s, it will, no doubt, clear up in a few days.

C.R. Jackson’s rock well which he had put down a week or two ago proved to be a sulphur well, so he is having another drilled on his premises. Apparently the drill went too deeply into the rock.

The town has many lovely displays of flowers at most homes. Some are limited in extent, but there is a growing interest in floriculture all over the town, and occasionally one observes a garden of particularly outstanding luxuriance and beauty. Such a one is that of Mr. Charles Jackson, east side of Division Street South. It is one of the finest. Mr. Jackson keeps his plot clean as a pin, well fertilized and watered, which are the secrets of his success. He has a great variety of flowers and some eighteen or twenty varieties of foliage that are marvellously (sic) beautiful and should be seen to be appreciated.

[. . .] Mr. Jackson was born in Dorchester Township, Elgin County, and was the son of the late Mr. and Mrs. James Jackson. It was here he learned the cheese-making business. In 1884 he went west to Langdon, North Dakota, and in 1888 was united in marriage with Miss Tena McCrae at Grand Forks, N D. They lived there until 1904, when they removed to Gosfield, purchasing a farm just east of this town, where they lived for 12 years. Mr. Jackson then built a home in town on Division street south, and he and Mrs. Jackson moved to their new home. Mrs. Jackson died three years ago.

The surviving members of the family are: Three sons, Andrew, living on the farm, just east of town; Claire, of Detroit, and Oral, of Kingsville; one daughter, Mrs. Wilton Messacar, of Kingsville, and one brother, Edward, of Kingsville.