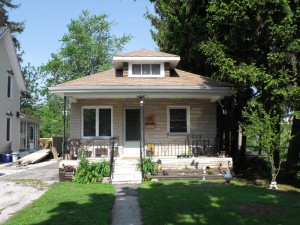 This home lies between the J.W. King house (built 1882) and Elihu Scratch house (built 1887). For many years, until the mid-1910s, this property was actually a lane to Scratch’s “coal and wood yard.” At the entrance of the lane, off Division Street South, scales were located to weigh the wagons entering and leaving the yard. In 1915, Angeline King purchased a lot on Mill Street West to be used as the new entrance to the “rear lot” and the lane was closed off. George and Mary Turcon purchased the lane and part of the “rear lot” in 1938 and had this house built. The “rear lot” was acquired by the Lions Club of Kingsville in 1946 “to be made into a playground for youth and children.”

An important real estate deal was completed here Tuesday last when Miss King purchased a lot on south side of Mill st. west from Mr. J. Peterson, just west of Ezra Bertrand’s. The land will be used as a street to get to the rear of about fifteen lots which Miss King has in the rear of her Division street property. This is the street the town talked of putting through some years ago but failed. These lots are in an excellent location and should sell rapidly.

The committee appointed to report on advisability of opening new street off Mill street south, just to the west of Ezra Bertrand’s, said they were of the opinion that the street would be too narrow, 45 feel. They had spoken to Mr. Peterson about purchasing an extra five feet from him so as to make it fifty feet in width, but had not yet got any definite answer from him.

On Wednesday evening last a Lions Club was organized here by District Governor H. Irvine Wiley, of Windsor. The organization meeting was held at Kingsville Golf and Country Club.

The Kingsville Lions Club have just completed a deal whereby they purchased a piece of property behind the United church to be made into a playground for the youth and children of the town.

The property which cost about $1,500, will see tile laid next week and it is hoped to have it in shape for softball by May 24th. The Lions Club intends to put another $2,000 to $3,000 into the project this year.

At an executive meeting of the Kingsville Lions Club held last Monday night, it was decided to purchase flood lights for the Lions Playground so that softball could be played in the evenings. The lights, which will cost over $1,200, will be ordered immediately.

As the club has already spent over $6,000 on the Scout Hall and another $2,000 on its playground, the lighting equipment will put a serious draw on the club’s coffers.

“We understand that some individuals would like to assist u with donations to help us put up these lights,” said President Don McCay, and added that any contributions would be very welcome as it is essential that lights are put up this year.

[. . .] This new park will officially be opened on May 24, with a double header softball game between two local men’s and two ladies’ teams taking part.

Alvin Sandord and Hubert Scott, members appointed by the local club to supervise this project, say that the two acres of land which was purchased by the club from W.G. Long, and a piece 66 feet x 76 feet, which was leased by the United Church to the Lions Club for 25 years, will be under supervision so that parents need not worry when their children are at the Kingsville Lions Club Playground.