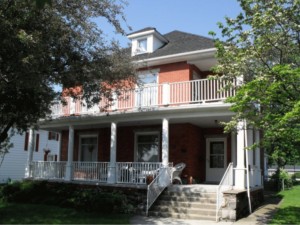 The year after the Epworth Church was built in 1893, the Kingsville Natural Gas and Oil Co. purchased the old Methodist church on Main Street East. The parsonage, also on Main Street East, continued to be used by the Methodist ministers until it was sold to Dr. Jenner in 1907 and plans were made to built a new parsonage just south of the church. The two-storey residence was designed by Thomas Jenner and the Woodiwiss Bros were selected as masons, using brick from the Miner Brickyard. The parsonage was completed in November of 1908 and the first occupant was Rev. Mr. Millson, who had been living in the Wigle flat over the Woodiwiss Bros’ store. In January 1914, “the Methodist congregation placed $1,431 on the plates to complete the payment of all debt on the church property” and “a public meeting was held in the auditorium of the church at which the mortgage was burned.”

At the meeting of the Trustee and Quarterly boards of the Methodist church last week it was decided to erect a new parsonage on the lot just south of the church, to cost in the neighborhood of $3,000. Work will be commenced in the Spring.

On Tuesday last, while Messrs Chas. Riddell and John Stoner were slating the new Methodist parsonage, a portion of the scaffolding gave way and they fell to the ground a distance of twenty feet. Mr. Riddell sustained a fractured rib, while Mr. Stoner escaped with a severe shaking up.

The silex* walk from Stanley Street to the Methodist parsonage is completed and the walk on Pearl st. west from Queen to Prince Albert was started yesterday morning.

A meeting of the ministers of Kingsville and neighboring places, was held in the school room of the Methodist church, on Monday last, with a view to the formation of a Ministerial Association. It was unanimously agreed that an association be formed under the name of the “Kingsville Ministerial Association.” That meetings should be held on the first Monday in each month, that the Rev. Mr. Masters be President, and that Rev. Mr. Galt be Sec-Treas. It was also agreed that the next meeting should be held in the Baptist parsonage, and the Rev. Mr. Millson should introduce the subject of “Our duty in regard to the coming Municipal election.”

Dr. Jenner on the Care of Infants

On Friday last a meeting of unusual interest was held under the auspices of W.C.T.U. in the Methodist parsonage, to which the mothers of the community who have small children’s were invited to hear a lecture on the “Care of infants” by Dr. Jenner. There was a very large attendance and from first to last the whole affair was a decided success.

Dr. Jenner was in great form and held the undivided attention of all present for about three quarters of an hour, during which time he advocated the liberal use of common sense, fresh air, cold water, and light, and warned the mothers against the many common and deadly mistakes that are constantly being made.