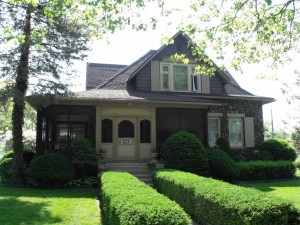 In the 1930 Kingsville Municipal Election, George Washington Hall was elected mayor by a vote of 414 to 401. A railway man, George and his wife Belle moved to Kingsville in 1909 when George was transferred from Buffalo to the Kingsville Train Station. Shortly after arriving, George became station master and he held that position until his retirement in 1962. George and Belle had this home built in 1912 and lived there for 36 years until it was sold to Dr. Peter Grayson, a Windsor optometrist. In addition to working for the railway, George had a large building constructed on the south side of Main Street East in 1926. The block housed an auto garage, billiard hall and bowling alley.

Liquor estimated to be worth $1,800 was seized Friday at the home of G.W. Hall, in Kingsville by License Inspector Stone.

Another Garage and Oil Station

The town will have, when this building is finished, five garages and seven oil stations.

Quite a number of the close friends of Mayor George Hall and Mrs. Hall surprised them at their home, Division street south, on Thursday evening, giving them a party in honor of the victory Mayor Hall had at the polls at the recent election. A very pleasant evening was spent and bridge was enjoyed.

George Hall, town, says that when a wounded buck looks you in the eye, only 20 feet from where you are standing, it is time to climb a tree. This is just what George did, and to prove it, ask Dr. McKenzie.