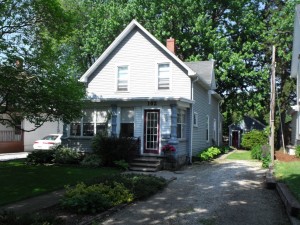 Nellie Scratch’s wedding to Earl Christopher Hagerman the morning of April 18th, 1910 was described as “quiet” and “brief but deeply impressive.”  The newlyweds left that evening for their new home in Doe Run, Missouri but came back to Kingsville for the birth of their daughter in
September 1911. Unfortunately, two years later, Earl left to go travelling: he married Jessie Pope in Jamestown, New York in 1914 and together they had a daughter born in Ohio, another daughter in Virginia and a son in the Republic of Panama. Nellie remained in Kingsville and was granted a divorce in Detroit in 1916. Elihu Scratch had this house built on the lot just south of his home for
his daughter Nellie and granddaughter Josephine in 1917, and they live here until Nellie married Dr. J.T. Hackett in 1930. After her father’s death in 1933, Nellie moved into his home at 98 Division Street South.

James Pearson has withdrawn the bill for divorce before the senate, as he regarded it as impossible to have it put through this session. [. . .] Nothing conduces to immorality and crime more than lax ideas concerning the marriage relation. Divorce laws are made by and for socialists, anarchists and their sympathizers, and the people of Canada should raise such a protest against the proposed act, that the government will think twice before giving it sanction. As the law stands now it costs a small fortune to obtain a divorce in Canada, and as the people who generally seek divorce here are wealthy debauchees we believe they should be made to pay still higher for their disgraceful conduct.

For most of Canada’s first century adultery was virtually the only basis for divorce and, before WWI, only Nova Scotia, New Brunswick and BC had divorce courts, [. . .] In provinces without access to judicial divorce, the only alternative was an appeal to Parliament for a statutory divorce, an expensive process that limited access to the wealthy. The most common divorce alternatives were desertion, legal separation and divorce in an American jurisdiction which, though it had no legal force in Canada, seemed to satisfy public opinion.

The Canadian Parliament gave divorce jurisdiction to the Supreme Court of Ontario by virtue of the Divorce Act (Ontario) of 1930 [. . .]

In 1968 Canada’s first unified divorce law was passed. At that time, divorce became easier to obtain, although considerable legal and other difficulties remained. Divorce could be obtained on the basis of a matrimonial offence (previously the only basis on which divorce was available) or on the basis of marriage breakdown.

Nellie Hackett (Scratch), late of Kingsville, passed away Friday, January 26, 1979, at Leamington Hospital, at the age of 94 years.