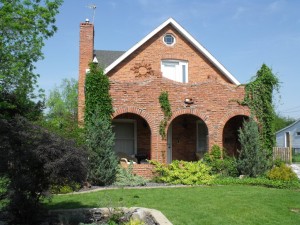 When George Miner sold his home at 144 Division Street South in February 1917, he still owned the empty lot on the corner of Division and Stewart. Later that year, George “moved his frame house from the Miner homestead to his lot in town on Division street just north of the P.M. Railway. He will fit it up to sell or rent.” The house was purchased by James O. Brown, a local fisherman, in 1919. The following year Brown was appointed Kingsville’s Chief of Police, at a salary of $20 per month, and held that position for 12 years. James and his family moved to Windsor in 1934 when he became “a foreman in a Chrysler plant.” The Canadian National Institute for the Blind purchased this house in 1946 and it became the home of Earl Warren Green and his wife Maggie. Earl lost his sight in WWI, and became an instructor for the C.N.I.B. in Toronto before retiring to Kingsville.

In the appointment of Chief of Police considerable discussion took place. Mr. Loop thought a straight salary with pay for extras cut out was the most satisfactory method of dealing with this office. Mr. Salmoni asked Mr. Brown to define what he considered his duties as Chief of Police. Mr. Brown defined his position. He stated that he went on duty at 5 o’clock in the evening and quit at the same hour in the morning, that he was to see that law and order were preserved and that the bylaws of the town were lived up to. The extra that he got from business firms was not compulsory and that the business men understood this. The Mayor though the arrangement with the Chief of Police had worked out very nicely this year. Mr. Brown also stated that Leamington had been paying its Chief of Police extra for acting as night watch around business places, but he was informed this had been discontinued this year. There were no other applications for the position and it was moved by Cooper and Healey that J.O. Brown be Chief of Police for this year at a salary of $100 per month and $100 for the year for Sanitary Inspector and Truant officer. – Carried.

[Earl] was on the Provost Marshal’s staff with Major Cartwright. Buried by shell while in action, Earl Green sustained injuries that robbed him of his sight [. . .]

Radio Commentator Claire Wallace recently made Earl Green the subject of his Toronto broadcasted program. He told listeners in detail how the blinded Green himself taught other sightless persons to get about without a guide. With Green’s patient tutelage they have learned to virtually “see” their way around town.

Standing six feet, five inches, this towering war veteran who was once an electrical worker, has been with the Canadian Institute for the blind for the past 10 years. In the past year he has trained 35 sightless persons, ranging in age from 24 to 84 years. One of this number was deaf as well as without sight. Of this number, 29 now get about Toronto at will and without guidance. The other six travel about their own neighborhood with ease.

Deceased was born in Kingsville, son of the late George and Minnie Green. He served as corporal in the 4th Canadian Mounted Rifle Regiment, C.E.F. Was a life member of the Canadian Legion in Toronto and was formerly employed by the C.N.I.B. in Toronto.

The town just won’t be the same with the passing of Earl Green. Earl, who was blind, was not only a special individual to our town, but travelled from coast to coast for years on behalf of the Canadian National Institute for the Blind. He proved, not only to the blind he taught, but also to us, who have natural eye-sight, that the handicaps of blindness can be overcome.

The Lt. Col. F.K. Jasperson (Ont. 188) Royal Canadian Legion of Kingsville has purchased in honor of Earl Green, an annual challenge trophy for cribbage, open to all active organizations in Kingsville