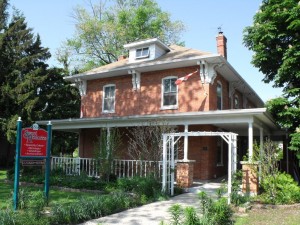 James Workman King was the oldest child of Col. James King, after whom Kingsville was named. Born in Michigan in 1835, he came to Gosfield with his mother and father as an infant. He attended high school in Port Clinton, Ohio where he met his future wife, Harriet Smith. In 1881 James hired his father-in-law, Sylvester Smith, to oversee the construction of his new brick residence which was completed the following year. Local craftsmen who worked on the house included Messrs. Bruner, Davey and Brimner. James and Harriet had six children: Fannie, James, Angeline, Gertrude, Mabel and Abby and they celebrated their 50th Wedding Anniversary at this home in 1911. Harriet died in 1912 and James followed her two years later. The Kingsville Public School Board purchased this home from Angeline in 1921 to be used as a high school, but sold it a few months later to Albert Eastman, Manager of the Windsor, Essex & Lake Shore Railway.

The many friends here of Mrs. Jas. W. King were greatly shocked to hear of her unexpected death at the residence of her daughter in Walkerville, on Friday, Sept. 6th. [. . .]

The deceased was lady of a singularly sweet and lovable disposition with a heart overflowing with warm affection for those in trouble or who needed a mother’s care. Her hospitable door was always open and she seemed never so happy as when her friends were enjoying with her the happiness of her home. For over fifty years she and beloved husband, now left to mourn her loss, lived an ideally happy married life.

Bereft in the evening of life of his life companion, our hearts go out in sympathy not only to the family but particularly to the husband whose loss is irreparable.

James Workman King, after an illness extending over nearly two years, passed away at his home here on June 9th last. Deceased, a couple of years ago, suffered a paralytic stroke, from the effects of which he never fully recovered. He was able to sit up and be taken around in a wheel chair and was only confined to his bed a few days before his demise.

Mr. King was a son of the late Col. King, and was born at White Pigeon, Mich., Nov. 10th, 1835. Col. King moved to this place when James was young, and formed the nucleus of what is now the town of Kingsville. [. . .] He was a man of sprightly disposition, loved the company of his fellows, and in latter years was an enthusiastic bowler, member fo the Kingsville Bowling Club, and during his illness, was frequently wheeled up the green where he could watch the game. He was a member of the church of England and a faithful attendant up to the time of his sudden illness.